Last weekend the UA team headed up to Albuquerque, NM for the Adoption Exchange Classic- the final full weekend of collegiate racing! To say we had success is an understatement!

TT: The weekend started off with a very lumpy (or hilly) time trial along the north I-40 frontage road. The Men’s A swept the podium with Joey leading the charge followed by Max Rich and David Carlson. 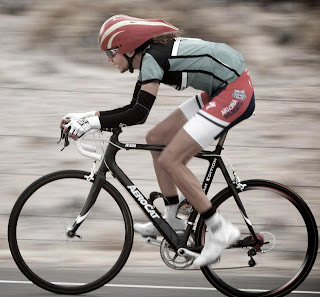 In the women’s A, Allison Alterman took 3rd and Shelby Hoglund came in 4th. Liz Schmitt took 1st place in the women’s B. It was a great start to a day of racing!

Photo: Joey rocking out in the SWCCC leader’s jersey.

With team spirits high, the crew headed a few miles down the road to the crit course held at a small auto race track. Fast, flowing and with banked turns, it was sure to be fast. Toss in a small hill and some solid winds and it was going to huuuurt! 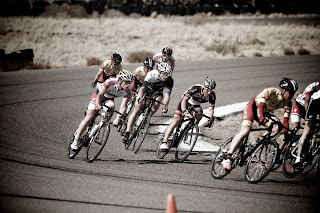 Liz had the first race and again took 1st in the women’s B. Next up were the ladies in the A’s who also raced with the Women 1/2/3. Allison and Shelby worked well together during the race and came in 3rd and 4th again behind ASU. The final race of the day had the 5 Men’s A riders line up in the P/1/2/3 Men’s field- a daunting race for a few of them since it was their first A crit! Max was clearly showing good legs and as the field splinted over time, he stuck with the lead group. He played the conservative card on the last lap and pulled out a 6th place sprint! Good for 1st in the Men’s A too!

After a tough day of racing, the team refueled at a local favorite: Sadie’s of New Mexico. The stuffed sopapillas are aaaaaamazing. 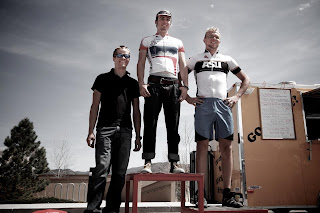 Sunday’s road race took the event to the east side of Sadie Peak…and up to 7,000 ft. The elevation wasn’t bad on Sunday at 5,300…but toss in a couple extra thousand and it was definitely felt on Sunday. The course was challenging and stunningly beautiful. 33 miles long with lots of rolling terrain and one big 18% .25 climb in the middle, lovingly named “Heart Break Hill”. It lived up to its name, especially the 2nd time up. Not to mention a howling head wind for 10+ miles.  All races ran concurrently so it was impossible to know how the others did until the end. Liz Schmitt hung tough with the Women 4’s and took 1st again in the Women’s B. The women’s A faced the difficult task of racing with the 1/2/3’s, but the 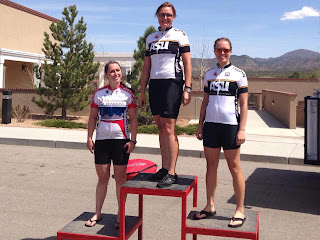 riders put up a good fight with Allison and Shelby going 3 and 4th again. In the Men’s A the field was decimated the first time up Heart Break Hill, with David Carlson making it in the lead group. Max and Joey eventually bridged in the headwind section as the field slowed. The attacks started flying on the rollers and Joey fell off the pace due to a bad day in the saddle. Andrew Keller brought a small chase group up to him and the two riders settled in for a long 2nd lap. Max and David hung tough, with Max again taking the collegiate win and David taking 3rd. Andrew and Joey came in 4th and 5th with Jake in 6th a few minutes in arrears.

The team extended their lead in the team and individual omniums and with one weekend left, it seems assured the team will win it’s first conference title in a number of years!